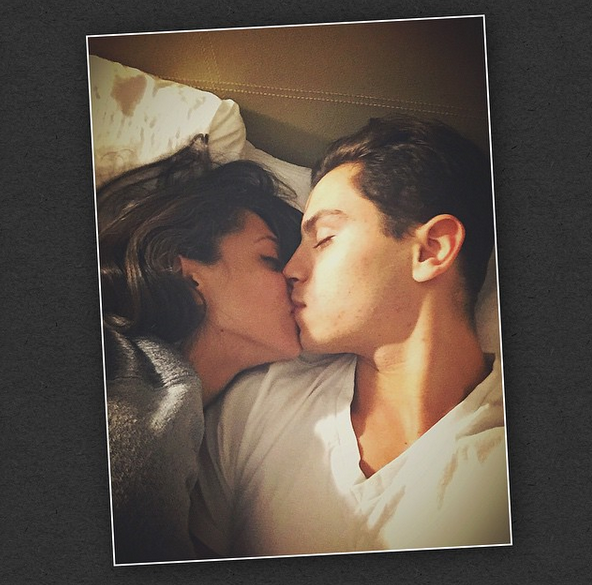 Fangirls — and boys — there is hope for you yet.

Jake T. Austin, best known for his roles on TV’s The Fosters and Wizards of Waverly Place, is now dating one of his biggest fans. The actor posted a photo in which he’s kissing a brunette while they are cuddled up in bed. “I’m crazy for her,” the 21-year-old NYC native captioned the photo with a blue heart.

The photo has nearly 20,000 comments because his fans identified the woman as Danielle Caesar, a Jake T. Austin superfan. While Caesar recently made her social media accounts private, there are tweets of hers dating back to 2010 which she sent to the heartthrob telling him that she loved him. In another post, she told him she wanted to marry him.

Before Caesar made her accounts private, she posted a picture of them together with the caption, “Every love story is beautiful, but ours is my favorite.”

The pair first met in 2011 at an autograph signing in NYC. She posted a photo of it. Soon after, he started following her on Twitter. For years, she posted about him all the time:

Apparently her Twitter stalking paid off because now she’s snuggling up with him in bed.

Austin is in a weird place professionally. The cute boy next door rose to fame starring on Selena Gomez’s Disney Channel show. He appeared in two seasons of The Fosters before being replaced last year.
Source:

2 thoughts on “Wow! Jake T. Austin Is Now Dating One of His Twitter Fangirls”