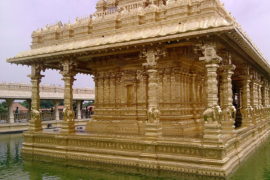 The Ancient Holy City of Vellore

One of the oldest cities of South India, Vellore on the banks of the Palar River stands for its rich historic heritage. It is one of the most important religious sites of Tamil Nadu. The town has prominent influences from the ruling dynasties of Pallavas, Cholas, Vijayanagara Empire, Rashtrakutas, the Carnatic Kingdom, and finally the British. Once a princely state, this town has also been a famous battleground for historic wars. Popular among explorers and pilgrims, Vellore makes for an intriguing exploration of its temples, forts, and monuments.

Vellore is located at 142 Km from Chennai, 70 Km from Kanchipuram, and 106 Km from the pilgrim town of Tirupati. The best way to reach Vellore is via Chennai. You can take an outstation cab from Chennai airport to Vellore.

The ancient and holy city of Vellore still has traces of the rich legacy of the early Dravidian kings and rulers, which reflect in the city’s overall architecture and the religious structures. The ornate pillars, tiered temple towers, intricately carved but robust stone structures boast the glory of its bygone eras.

While you are in Vellore, make sure you visit all or at least some of the must-see temples and monuments and take a look back at the city’s past.

A 16th-century old fort stands right in the heart of the town, earning it the sobriquet of ‘the Fort City of Tmail Nadu’. It was built by Bommi and Thimma Reddy, under the patronage of the Vijayanagara King Krishnadeva Raya. The control of the fort changed hands from the Vijayanagara Empire to the Mughals, to the Maratha, and finally by the British in 1768 and remained occupied until India’s independence. The fort spreads over 133 acres of land, fortified by granite walls and flanked by a moat which presently offers boat rides for tourists. The double-walls of the fort worked as a military-level security in the ancient times.

This famous temple is located in Sripuram, about 10 Km from the Vellore city center and you can easily avail of cab service in Vellore to make a day drip to Sripuram. It is of the most dazzling structures of the region and known for its gold-coated architecture. The entire temple façade is coated in 1500 kilograms of gold leaf and spreads across 100 acres of land. This temple is of recent origin but has earned its recognition for being presided by the spiritual leader Sri Sakthi Amma.

About 13 Km outside the city of Vellore, you will find the Margabandeeswara Temple on the Bangalore-Chennai Highway. Built by the Chola Kings in the 13th century and is characterized by artistic sculptures of religious figures and carved stone pillars. The temple is dedicated to the presiding goddess Maragadambal and also enshrines a Swayambhu Shiva Lingam. You can also find other deities of other gods and goddesses like Ganapati, Subramani, Chandra Mouleeswara, Pancha Mukha Lingam, Saptha Matrukas, Lakshmi, Saraswati and Durga, on the temple premise.

Also called the Ratnagiri Temple, this holy site sits atop a hillock at 17 Km from Vellore town. One of the prominent temples of Vellore, this site attracts pilgrims and devotees of Murugan- an avatar of Lord Vishnu. Made in the Chola architecture style, this temple dates back to 14th century and has a granite chariot where the main idol resides. The temple premise boasts a huge tower at the entrance and also holds shrines of Ganesha, Dakshinamurthy, Brahma, Durga, and Chandikeswara.

The arcane edifices and the holy environment of the temples render an antiquated vibe to the town of Vellore, which makes it unique in all manners.