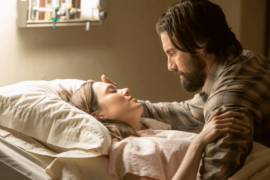 The 10 New TV Shows That People Are Most Excited About

Peoples become crazy about newly started TV Shows. And no doubt these popular TV shows are amazing. Here are the 10 best new TV shows that people are most excited about.

Minnie Driver plays Maya DiMeo, a mom on a mission who will do anything for her husband, Jimmy, and kids Ray, Dylan, and JJ, her eldest son with special needs.

Starring Corey Hawkins as Officer Eric Carter, the series chronicles an adrenaline-fueled race against the clock to stop a devastating terrorist attack on US soil — in the same real-time format as the original hit series, “24.”

Kristen Bell plays Eleanor Shellstrop, an ordinary woman who, through an extraordinary string of events, enters the afterlife in a case of mistaken identity. Ted Danson plays her wise afterlife mentor as Eleanor tries to shed her old way of living and discover the awesome (or at least the pretty good) person within.

Set for a 2017 debut, this is the first “Star Trek” series since “Star Trek: Enterprise” ceased production in 2005. Cocreator Bryan Fuller is set as the showrunner. No castings have been announced.

A mysterious criminal steals a secret state-of-the-art time machine, intent on destroying America as we know it by changing the past. Our only hope is an unexpected team: A scientist, soldier, and history professor who must use the machine’s prototype to travel back in time to critical events. While they must make every effort not to affect the past themselves, they must also stay one step ahead of this dangerous fugitive.

This drama follows a unique ensemble of characters whose paths cross and their life stories intertwine in curious ways. We find several of them share the same birthday, and so much more than anyone would expect. From the writer and directors of “Crazy, Stupid, Love.” comes a dramedy that will challenge your everyday presumptions about the people you think you know.