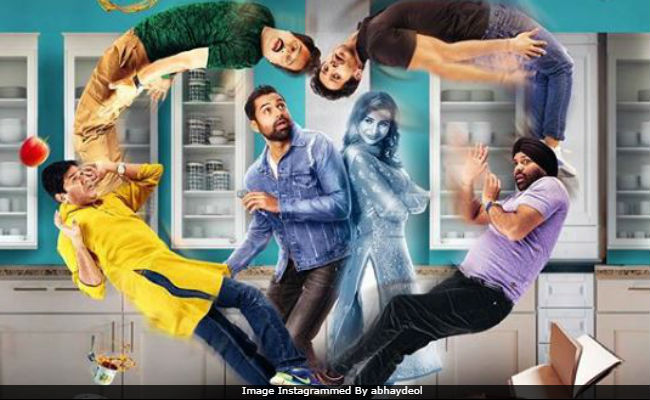 Bollywood has always amazed us with its choice of bringing two different and contradicting genres together. This time we are about to see an interesting combination of horror and comedy. After ‘Oye Lucky! Lucky Oye!’, we will again see Abhay Deol in a similar plot where he is playing the role of con-man. Abhay Deol tries to usurp a flat where a ghost who tries to restore law and order in world accompanies him and the story revolve around this plot. Both the genres are abused in this movie while being hideous and funny together at the same time, which is completely unintentional.

Overall Ratings: This movie gets a poor rating of 1/5 on the scroll.in followed by 2.5 &1.5 on Times of India and Bollywood Hungama respectively.

This movie is a perfect example of not so good mixture of horror and comedy. This movie covers the aspects of injustice happening in our society. First, Nanu (Abhay Deol) is introduced who is a thug and along with other men, he runs a scandal in Delhi of usurping flats. However, apart from his ruthless and arrogant character, he tried to save an accident victim by taking him to the hospital. This good deed of him started changing him and he loses his concentration on work, wine, women, and crime. After a while, Nanu realizes that the ghost of Siddhi (Patralekhaa) accompanies him at his posh flat in Noida. Siddhi turns out to be the girl he tried to save from the accident and her after becoming ghost tries to establish law and order in society while removing corruption.

To get rid of Siddhi, Nanu contacts her father (Rajesh Sharma) by finding his address but it seems insufficient and she remains in his flat. To make things worse he then decides to consult a ghostbuster (Shreya Narayan) which ended in total disaster. As a result, Nanu loses his interest in his work of crime and his source of livelihood came under danger.

All the drama of the climactic exchange between a con man, a mourning father, and a roving spirit comes to an emotional ending, which locks the destiny of this film. Revealing everything would be a bad closure. So, plan it with the friends or family as the consumers can compile the net payable amount with exclusive movie coupons to get cashbacks up to Rs.150.

‘Nanu ki Jaanu’ bring back the team of Abhay Deol and Manu Rishi who gave us a similar plot before of ‘Oye Lucky! Lucky Oye!’. However, this time it was only bearable by the comedy and dialogues by Abhay Deol and Manu Rishi in the first half. On the other hand, Patralekhaa’s role is limited to only 10-15 minutes, which makes her almost absent. The writers who seem to have experience only in daily soap ruined Rajesh Sharma’s role. The only thing good in this movie was the dialogues and acting of Manu Rishi.

This movie is directed by Faraz Haider who is known for including a message in his movies. His previous best-known work is ‘War Chod Na Yaar’, which he directed and it was praised for a great message it delivered to society.

Not only this movie falls under the banner of a good director but its writer is also a well-known one. Manu Rishi Chadha who an apart from playing a role in the movie is also the writer of it.

Nanu ki Jaanu will surely give you some great dialogues, punches, and comedy but the music it provides is unadorned. ‘Tere Thumke’ will surely draw everybody’s attention but ‘Bhoot Aaya’ fails to do the same. On the other hand, rest of the songs including ‘Kali Choti’, ‘Jai Mata Di’ and ‘Tujhe Dekhti Hai Nazar’ are very bad because of loud background score by Dhruv Dhalla.

For a movie to be a blockbuster then apart from a good script, good opening and great cast, it should also have good critic reviews. Let us see some critic reviews and maybe they can justify the ratings of this movie.

Scroll.in raised a question about the scenario of the Bollywood and Abhay Deol’s circumstances for opting this movie. By comparing the previous movie of Abhay Deol and Manu Rishi together with Nanu ki Jaanu, they wrote that this movie is a horrific dark comedy which contains bad dialogues and poor execution.

Bollywood Hungama said that Nanu ki Jaanu does not only provide a bad beginning but it has a bad ending as well. They criticized Manu Rishi Chadha and added that his adaptation along with his screenplay is tremendously low.

Times of India gave it 2.5 stars out of 5 and wrote that this movie is a poor remake of the Tamil movie Pissau which was funnier than Nanu ki Jaanu.

The first trailer for this movie was launched on 26 March 2018 and the movie was released on 20 April 2018. From the trailer to the release this movie was not able to create a hype and attract the audience. Blame it on the direction or the plot or the performance, this movie could not manage to entertain the audience as a whole.

On the first day, it collected only 0.75 crores and at the end of the opening weekend only 3.10 crores only. Therefore, this movie earned only a total of Rs. 4 crores only making it a flop movie.

Conclusion: Calling this as an average movie, before calculating the performance might be unjust. Every film covers a lot of hard work and research of the cast & crew which deserves a one time watch from the fans. If it is made for you, dive into the significance of the movie characters. There are many online websites which provides the ease of booking movie tickets through online means. Say no missing the fun of horror & comedy!