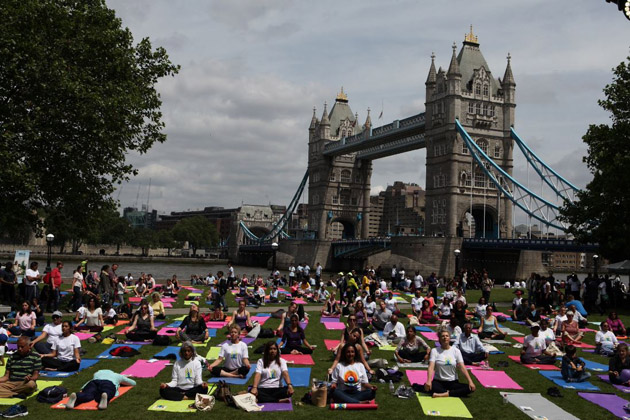 Yoga is a 5,000-year-old physical, mental and spiritual practice Having its origin in India, Which Aims to transform both body and mind. On December 11 in 2014, the United Nations General Assembly declared June 21st as the International Day of Yoga. The declaration came after the call for the adoption of June 21st as International Day of Yoga by Hon’ble Indian Prime Minister, Mr. Narendra Modi during his address to UN General Assembly on September 27, 2014, wherein he stated:

In Suggesting June 21, which is the Summer Solstice, as the International Day of Yoga, Mr. Narendra Modi had said that “the date is the longest day of the year in the Northern Hemisphere and has special significance in many parts of the world. “

Yoga enthusiasts in Paris with Eiffel Tower in the background

Yoga enthusiasts in London with Tower Bridge in the background

Yoga asanas being demonstrated at Yoga Day event in Chandigarh

Yoga for all Seasons: Yoga enthusiasts braved the weather to celebrate the spirit of IDY 2016 on River Thames

Performance of Yoga Asanas by students in Bangladesh

Practice by Army personnel of Central Command in Lucknow

Yoga at sea, onboard INS Airavat on Yoga Day