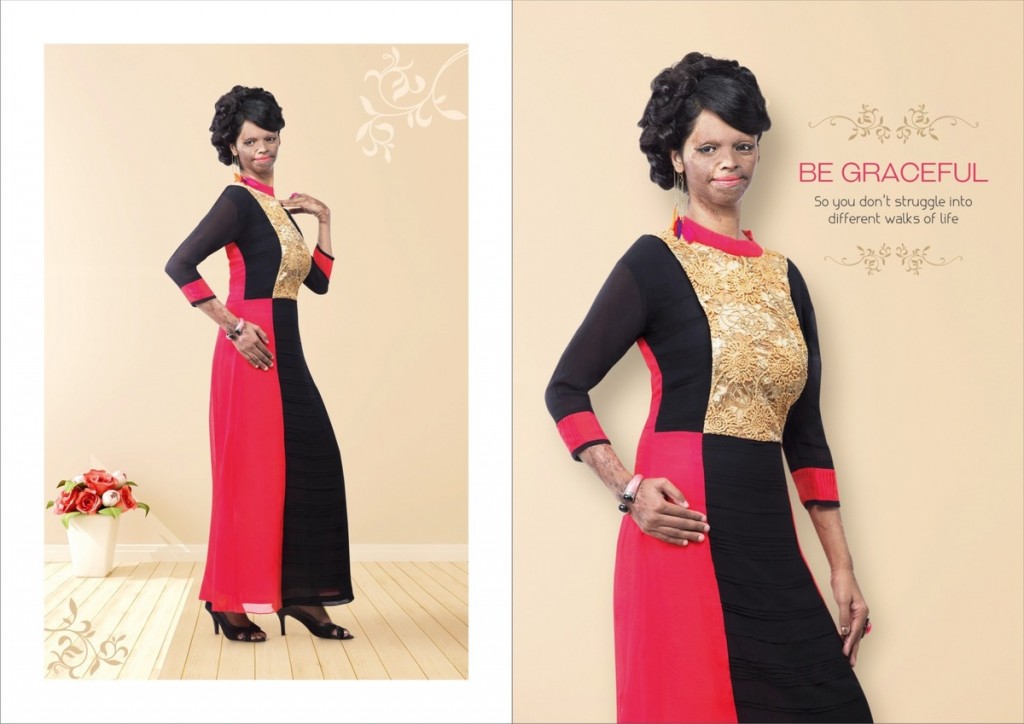 Acid attack survivor and activist, Laxmi has become the face of a new fashion campaign in India called “Face of Courage,” which challenges social perceptions of physical beauty and attractiveness.

Over a decade ago, Laxmi (who only goes by her first name) was attacked by an older man and his friend, who poured acid on her face and arms after she refused his marriage proposal. She was just 15. The perpetrators were eventually imprisoned, but Laxmi had to undergo expensive medical treatment and several surgeries.

Now 26, she has become an advocate for women affected by acid attacks, a widespread form of gendered violence in India. Her public interest litigation led to a major judgement in 2013, when the Supreme Court ordered restrictions on the sale of acids and higher compensation for victims.

However, with limited enforcement of these guidelines, Laxmi continues her campaign through her non-profit organisations, Chhanv Foundation and Stop Acid Attacks, which work on rehabilitating and counselling other survivors. In 2014, she was presented with the International Women of Courage Award by Michelle Obama.

“I began showing my face gradually. Then other survivors saw that if I could do it, why couldn’t they?” Laxmi told Mashable. “People victimise acid attack survivors, but I think we need to come out of this mindset.”

There are approximately 1,000 acid attacks in India every year, and victims often face considerable social taboo and economic difficulties. Recently, several campaigns have tried to encourage survivors to go public with their stories, such as a path-breaking calendar shoot in 2014 featuring women like Laxmi, with clothes designed by fellow survivor Rupa. With the help of Stop Acid Attacks, survivors also run a cafe called the Sheroes’ Hangout in Agra.

It was this resilience that inspired Indian apparel retailer Viva N Diva to ask Laxmi to lead its fashion campaign. “The whole idea was to challenge the widespread judgement of women on the basis of their beauty. You always see actresses or models on the cover of a magazine,” Aayushi Rastogi of Viva N Diva said. “We also thought of creating employment opportunities for these women who have been socially cornered, and bring out their inner spark.”

Laxmi hopes that awareness campaigns like these will not just change attitudes but also deter potential assailants. “Earlier people did not want to see us, but now they want to meet us and take photographs with us,” she said. “It will also change the attitude of criminals who realise that girls who’ve been attacked won’t just sit quietly within the confines of their homes.”